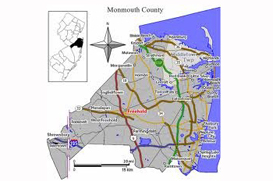 Monmouth County, New Jersey, the northern most county of the Jersey Shore, is part of the New York Metropolitan area and ranks in the top 2% of the wealthiest counties in the United States. The county is comprised of a total of 665 square miles with 472 square miles of land and 193 square miles of water. Topographically the area is mostly low-lying and flat with some hills. Numerous beaches are located in the eastern portion of the county along local rivers and the coastline of the Atlantic Ocean. In addition to numerous major roadways such as the Garden State Parkway, public transportation throughout the county is readily available on the NJ Transit Bus and Railway Systems providing commuters easy access to major metropolitan areas of New York and New Jersey. Living at the Jersey Shore is a lifestyle full of recreation and with its extensive public transportation system play in and around Monmouth County is simply hassle free and convenient for enjoying local entertainment venues or visiting the many attractions of New York City, Philadelphia, and Atlantic City.

As of 2010 Monmouth County’s total population was 630,380. Age demographic data indicated that 33% of the population was under the age of 24, 30% was between the ages of 25-44, 24% was 45-64 and 13% was age 65 and older. Brookdale Community College located in Lincroft, in partnership with Rutgers University, and Monmouth University in West Long Branch offer undergraduate and graduate programs. Monmouth County is home to many parochial schools, one secular school, Ramney School, multiple public schools, and the Monmouth County Vocational Technical School district with five magnet schools.