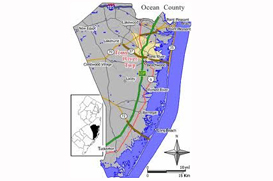 Ocean County New Jersey also known as the Jersey Shore is part of the New York Metropolitan area
and is located 70 miles south of New York City, 50 miles east of Philadelphia, Pennsylvania, and 25 miles
north of Atlantic City, NJ. The County is comprised of 636 square miles of land and 279 square miles
of water making it the largest county in New Jersey with a total of 915 square miles. Topographically
the area is mainly flat costal land with many beaches located on local rivers, the Atlantic Ocean and
Barnegat Bay. Throughout the county there is easy access to major roadways such as the Garden
State Parkway and public transportation is readily available on the NJ Transit Bus and Railway Systems
making work and play in and around Ocean County simply hassle free and convenient for enjoying local
entertainment venues or visiting the many attractions in New York City, Philadelphia, and Atlantic City.

As of 2010 Ocean County was the fastest growing county in New Jersey with a total population of 576,567. Age demographic data indicated that 30% of the population was under the age of 24, 26% was between the ages of 25-44, 22% was 45-64 and 22% was 65 and older. Ocean County College partnered with Kean University in Toms River and Georgian Court College in Lakewood offer undergraduate and graduate programs. Also located in Lakewood is Beth Medrash Govoha, a Heredi Yeshiva, one of the largest in the world. In addition, to multiple public high schools Monsignor Donavan Roman Catholic high school is located in Toms River and the Ocean County Vocational Technical School district has 3 campuses plus the Marine Academy of Technology and Environmental Science and the Performing Arts Academy.